by Shreyas Deshpande
in UPSC
3 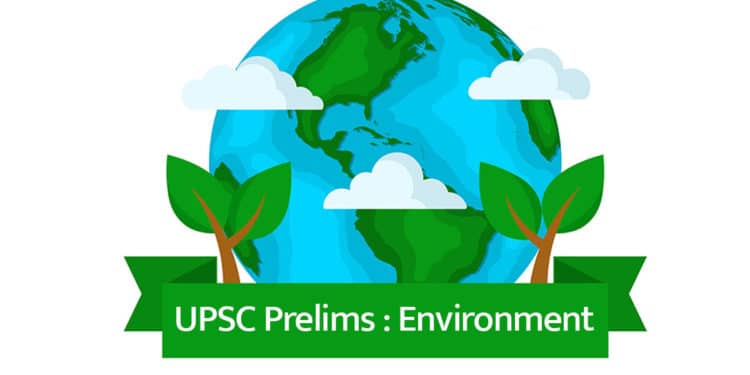 When we filled the form of UPSC Prelims, there was an option asking us that do we want to fill the form for INDIAN FOREST SERVICES. Many of us would have filled it too!! So it means that UPSC is conducting SAME EXAM FOR CIVIL SERVICES as well as for FOREST SERVICES. This highlights the importance of environment in the paper with each year having almost 15-20 questions there in the prelims.

Though there are some conceptual questions, year after year, UPSC is becoming factual when we talk about Environment.

So, my resources for Environment are:-

A. Shankar IAS Notes for basic understanding. (if you are reading from that old 2011-12 version as I am, it will be good to take some extra efforts and add some notes of current relevance)

B. Daily reading of Newspaper. (Almost everyday, something related to envt. is happening in our country.)

C. Websites of some important organizations. (I will tell why)

D. Wikipedia for any random and quick information.

Coming to the type of questions asked in Environment,we can see the following trends:-

6. Some map related ques. on TIGER RESERVES, BIOSPHERE RESERVES, NATIONAL PARKS and what not.

So, as always, I will provide some topics covering Current affairs about above mentioned areas and will also highlight how a question can be asked on it.

1. In the conceptual part, you have to be sound with certain areas like, CORAL REEFS, MANGROVES, BIO-REMEDIATION TECHNIQUES, CONSENQUENCES OF GLOBAL WARMING BEYOND 2.0 Celsius. PLus you must know the places in India where Coral Reefs, or Mangroves are found in abundance for a map based que.

Learn about a concept known as SATURATION HORIZONS. Their level in oceans is being narrowed from the ocean floor due to Ocean Acidification. This is harmful for al organisms in the sea which are with Shell.

This year, during the 14th UNCCD COP in India, a term named SOIL ORGANIC CARBON was very much in news. So please know about it.

IPCC (founded by UNEP and WMO in ??)have come up with some very important reports linking different aspects of Envt, with their relation vis a vis GLOABL WARMING. So please note the findings of those 2 reports which are SPECIAL REPORT ON OCEAN AND CRYOSPHERE, SPECIAL REPORT ON CLIMATE CHANGE AND LAND.

2. India, this year 2019-20 hosted a no. of Environment related programs. The prominent were:-

United Nations Convention to COMBAT DESERTIFICATION took place in India. It has been established under UN Conference of Environment and Development UNCED or simply EARTH CONFERENCE 1992, It is THE ONLY CONVENTION DEALING WITH LAND. There is a concept called LAND DEGRADATION NEUTRALITY related with it. Know it. India has brought it target of conserving (__) hectares of land from 2030 to 2025 (find the no.) Also there is a term BONN CHALLENGE associated with it. Know it please.

Then in Feb. 2020 CONVENTION ON CONSERVATION OF MIGRATORY SPECIES or BONN CONFERENCE was arranged in Gandhinagar, Gujarat. Know about its APPENDIX 1 and 2

The Urial, Smooth Hammerhead Shark and the Tope Shark were listed for protection under Appendix II, which covers migratory species that have an unfavourable conservation status and would benefit from enhanced international cooperation and conservation actions. Now, please read about ALL these species on WIKIPEDIA, i.e. their HABITAT, their status in IUCN RED BOOK, etc. (basic info.)

3. (A) FOREST RIGHTS ACT (FRA) 2006, was very much in news last year due to an order of SUPREME COURT for eviction of Tribal dwellers. FRA is a vital act for Tribal people as it provides them rights as COMMUNITY RIGHTS, COMMUNITY RESOURCE RIGHTS, Individual Land Rights,etc. GRAM SABHA is the initiating point for recognition of rights. This was a que. in one of previous year papers!!

(B) FOREST ACT 1927, Central Govt. tried to amend this act last year. It had provisions like giving more authority to Forest Officers, introduction of PLANTATION FORESTS, etc. It was widely criticized, hence was in news. So please read its new amendments. Also know about a funde named as NCAMPFA set up by Central Govt. for afforestation under Forest Coservation Act 1980, under guidelines of SC.

(C) CRZ NOTIFICATION:- Central Govt. under Envt. Protection Act 2986, has brought a new CRZ Notification, amending notification of 2011. This consists of 4 types of CRZ Zones. It has eased the criteria for building infrastructure related to Tourism in CRZ zone 3. FLOOR SPACE INDEX which was freezed in 2011 is being de-freezed. For CRZ 4, a no-development line of 50 m is proposed. It is based on recommendations of SHAILESH NAIK committee.

4. ALL INDIA TIGER SURVEY:- A good news for Indian Conservation efforts was that no. of Tigers has increased to 2900+ in latest survey. The survey take place every 4 years. It is overseen by National Tiger Conservation Authority (who is its head??, under which act is it formed??). INTERESTINGLY, there are 3 Tiger reserves which DO NOT HAVE ANY TIGER in them. These are shown on map as follows:-

So, we have BUXA, PALAMAU and DAMPA Tiger reserve, which DO NOT HAD ANY TIGER DURING SURVEY.

Techniques used in Suvey were CATRACTS, MAXIMUM ENTROPY MODEL, CYTOCHROME-B-MARKER. M-STRIPES is also one of them, on which a que. was asked in 2017 pre. So be ready!!

5. Recently SC has granted permission for translocation of CHEETAH from Africa to India. It has formed a 3 member committee to find a suitable habitat for it in India. CHEETAH IS LISTED AS VULNERABLE ON IUCN RED LIST. So please know about KUNO, SHAHGARH, and NAURADEHI WILDLIFE SANCTURIES as these are the possible sites.

I am also writing about HANGUL STAG, or Kashmiri Stag as due to 370 article issue, j&K is in news almost every 2 days.So we must know about it in detail. They are predominantly found in DACHIGAM NATIONAL PARK and are listed as CRITICALLY ENDANGERED (remember criteria for listing any species as Critically endangered??) on IUCN Red Data Book.

6. Recently many birds died at SAMBHAR LAKE due to a bacteria named as CLOSTRIDIUM BOTULINIUM. So, locate SAMBHAR lake on map. Know the flora and fauna of region. Also know what type of lake Sambhar is.

7. OPERATION TURTLESHIELD:- By WCCB and West Bengal Govt.:- to stop the illegal sale of INDIAN PEACOCK SOFTSHELL TURTLES. Given species is VULNERABLE.

9. AICHI TARGETS:– These were adopted in CONVENTION ON BIOLOGICAL DIVERSITY in 2011 for 10 years. There are 20 targets. You can check them here- https://www.cbd.int/sp/targets/ Please note that, India has completed 2 of the targets. Know which of the targets are completed by us.

10. INDIA STATE OF FOREST REPORT 2019:- Do you know who produce this report?? Note down the states with largest forest cover. India has forest cover LESS THAN 33%.Such statements can be asked in paper. Also know types of cover i.e. DENSE COVER, or very dense cover and so on. For the FIRST TIME,report has covered information about WILDFIRES IN INDIA. Also, note the states with increase and decrease in forest areas.

11. FOREST PLUS 2.0 :- India and USAID is implementing this project. Earlier India has benefitted from FOREST PLUS, hence this renewed partnership.

Locate them on atlas plus also know the locations of remaining sites. The biggest Ramsar site in India is Sunderbans.

13. NATIONAL BIOFUEL POLICY 2018:- I expected a que.on it in 2019 but it didn’t ame up. So this remains live for 2020 also. There are two categories viz. basic and advanced of biofuels. Know the commodities from which the biofuel can be made.There is a scheme known as JI-VAN YOJANA related to funding Biofuel projects. Notethat this cheme is different from VAN-DHAN YOJANA!!

14. For Pollution part:- do BASICS. Know the initiatives of TERI,NEERI and Bureau of Energy Efficiency also. Indian Govt. launched NATIONAL CLEAN AIR PROGRAM last year. So read about its terms.

17. Energy Conservation:- Know India’s INTENDED NATIONAL DETERMINED CONTRIBUTIONS for Paris Agreement. There are 3 of them. Plus know about the Renewable potential of India, and the target which we have set for 2022. Just google it and look for the pie chart of the same.

I am just giving reference of above topics as you may not forget them while revising them.

My suggestion is, COMPLUSORILY SOLVE VISION IAS 2020 PAPER NO. 19 FOR ENVIRONMENT SUBJECT. Solve it twice please. There are various organizations related to envt. which we don’t often read are given. It will be your best revision.

This was it from me regarding to Environment.

PLZ DO NOT TAKE THIS SUBJECT LIGHTLY.THIS CAN MAKE OR BREAK YOUR DREAMS.

Study the maps well. Do ALL Tiger reserves and Biosphere reserves.

Do your current affairs revision properly. It is very vital for Environment.

CBD (given above. Check AICHI targets.),

Read the ABOUT US section of each of these websites and OUR PROGRAMS/INITIATIVES section also for various new initiatives being taking place a over the word for conservation of Environnment.

With this COVID-19 outbreak, we human beings are slowly and surely realising the value of our NATURAL ENVIRONMENT. So while studying for exam, do apply that perspective of conserving Nature in your everyday life also.