by Shreyas Deshpande
in UPSC
6 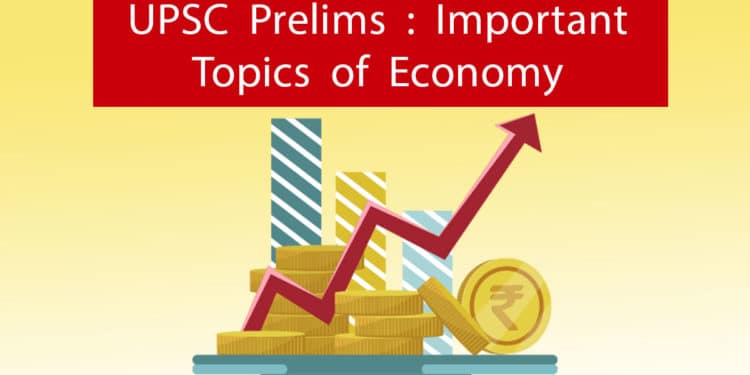 Hello everybody, I hope you people liked our Polity piece. And you told me the reasons too. Thanks for that.

So Economy! Another heavyweight of UPSC Prelims. This consists of on an average, 15-20-25 questions when we consider all of its subtopics. And, if we have a basic, proper conceptual knowledge of Economy in general and Indian Economy in particular, believe me, Our hit ratio can be 90% in Economy!!

I have studied from NCERT of Macroeconomy and Indian Economic Development, plus from the book of Ramesh Singh Sir. For Current affairs, I have used newspapers and Current affairs magazine. PLEASE DO NOT CHANGE YOUR SOURCES AT THIS STAGE. PLEASE!! STICK TO WHAT YOU HAVE. Revise one book 10 times rather than reading 10 books once!

Questions on Economy generally come from :-

A. Application of some basic “MACRO” economic concepts.

B. Trends in some (mostly macro) indicators of Indian economy.

E. Public Sector. (Govt. Budget, Schemes, etc.) I am writing Part 2 for Budget and Economic Survey of India with some facts and figures useful for pre.

F. Random ques. on emerging technologies and platforms. (especially after demonetization.) eg. que. on BHIM app in 2018, que. on NPCI in 2017.

G. Some ques. on Indian Economic Development, (from 1947 to now). eg. Service area approach que. in 2019 pre, or on Planning (very little on Planning is expected though now.)

H. Govt. schemes. (I am not writing about schemes here, but will write on which type of schemes to focus, and what aspects in a particular scheme for Prelims, in upcoming stages.)

So, my job here is to link some currently happened or unfolding significant issues with Indian economy to the above mentioned topics.

Hence, starting with a topic which kept recurring in newspapers for almost 9 months now!

Here, we will be requiring to know about types of slowdown, i.e. Cyclic and structural. The que. might ask us about the measures to be taken to tackle slowdown. Basically, there are two types of responses. Supply side response like LOWERING OF CORPORATE TAXES or demand side response like PM-KISAN, MGNREGA wages hike and so on.

almost everyday in the news! This year there was a spike in it in the winter season(2019-2020). reason being the rise in prices of food crops like onion. So we need to know types of Inflation. The above one is COST PUSH INFLATION. Other vital concepts which kept recurring in newspapers were STAGFLATION and SKEWFLATION. You will know about them from your basic source. (It can be Ramesh Jain Sir’s book, SriRam IAS or whatever suits you!

Fin. Min. Nirmalaji had said that “as India’s external sovereign debt is minimal compared to other economies, we can borrow from outside India.” The que. may be asked in about CROWDING OUT effect in this section.

In the TRENDS section, you can always keep an eye on FISCAL DEFICIT, Debt to GDP ratio, which tax is giving Govt. highest revenue. Reciepts of Disinvestment. foodgrains production in India. CURRENT ACCOUNT DEFICIT. GROSS NPAs of Banks(both public and pvt.) FDI flows in India,I will also suggest to check FDI inflow in India for SERVICES and Manufacturing separately also. Rate of production of IRON, STEEL, ELECTRICITY in India.

All this for the last 5 years. And from where you will get it? A one-stop solution is ECONOMIC SURVEY OF INDIA(ESI). If you have not made notes of it, you can use ANY compilation available. As I am writing it, on 4th April, there is a news of FPIs removing money from Indian market (highest till now for a single year) check the trend. India receives the highest amount of remittances from Foreign, check its trends.

You must know that India rejected to join RCEP in its current format. UPSC asks on basics. So they may just easily ask that, “with which of the following countries, do India have FTA?” A chart of such countries is given in ESI. (or simply google it.)

WTO is in 25th year, but with a sword on its existence due to rising tide of Protectionism and some flaws in its structure too. UPSC asks some terminology related to it. Once they have asked about the BOXES UNDER WTO, we must know in which box of WTO does PM-KISAN schems, Farm subsidies come. There is something like 4 MODES OF TRADE UNDER WTO. Just google it and keep a note of it.

Plus please know some basics about the structure of WTO as there was a hue and cry in The Hindu on non-functioning of WTO APPELLATE BODY There is another concept named as GREEN ROOM MEETINGS OF WTO, you should know what it is. Also, revise the BASEL norms. There are 3 stages. Just know what was in each stage. There might be a match the pair type que. Please keep an eye on AIIB, ADB and NDB(BRICS), if you have read properly, you know their full forms!

Remember the resignation of Urjit Patel, ex. Governor RBI. Reportedly, it was due to his differences with Govt. on issue of surplus transfer by RBI to Govt. So Govt. appointed a Committee under Bimal Jalan to decide it and it has given its report. The report has advocated a framework to transfer surplus of RBI. So know about Economic Capital Framework, trend of last 5 year transfers of RBI to Govt. some ratios like CAR, CRAR.

Que can be asked on its pros and cons. or simply which banks were merged.

SBI has started it for some category of loans. Before it MCLR was there. These rates are simply the interest rates below which Banks don’t lend. 2017 pre. que. was asked on MCLR.

Recently, LIC did it for Govt. So if you don’t know it yet, just google the term.

As economic impact of COVID-19 is severe on value chains, knowing pros and cons of a country in Global chain will be good. There is a term named NETWORK PRODUCTS which gained currency in Economic Survey. I will explain it in 2nd part.

its timelines, pros and cons. ESI has a section on it.

top 5 exports and imports of India.

Agricultural commodities in which India is no. 1 in production.

on Wikipedia or in your notes, the platforms available on it, recent changes. For eg. UPI 2.0 was launched.

Recently announced by Govt. We must know its highest allocation. How much will Center, States and Private Sector will contribute and yearly investments till 2025 must be jotted down.

Consumer Protection Bill 2019.
All 4 Bills of Labour Regulation codes (These are very important as it is for VULNERABLE SECTIONS, i.e. for our laborers majorly, so I will suggest to read all their basic provisions carefully.)

FINANCE COMMISSION(15th):- Constituted under Art. 280 of Indian Constitution. Important for us is its TERMS OF REFERENCE (remember, some Southern states had problems with use of latest Census data.) There were some important amendments done recently to include SECURITY issue in devolution of FC. So, know them. Also know what percentage of funds have been allocated to important terms in previous 3 Finance Commission Reports including this.

I will not play any wild guesses as UPSC can ask about ANY random Report. But as it is said that, “There is a method in madness too!” So our focus must be on reports of World Bank, IMF, ILO, World Economic Forum(WEF). Last year UPSC asked about indicators in EASE OF DOING BUSINESS REPORT of WB. This year, WB has added 2 new indicators. World Economic Forum has come up with a document on Blockchain technology. I had referred WEF website last year, so we can do it now also. (There are Envt. related reports also, we’ll look them in upcoming stages.) along with these, do refer Inflation related reports of our Govt. Know the exact Ministry and Dept. which publishes them.

Check which method is used by Govt.

As written above, I will take Budget and Economic Survey of India in a separate piece considering the gravity of those two. I will keep on reiterating that make the very fundamental concepts of Economy absolutely clear, so that it will help to at least ELIMINATE WRONG OPTIONS.

Polity and Economy make up almost 40 que. in Prelims paper. If you score as Rohit Sharma and Virat do in Indian run-chase, 60% job is done!!

I have added most vital topics on Indian Economy which are in news from UPSC point of view. If you think some might be added (their will be many more) do add and study them.

Thank you for this one.